This semester, I was fortunate enough to be in a class at Rice University that allowed me to travel to Istanbul over spring break and research a topic of my choice. I just got back a few days ago and for the first time in my life, after returning from abroad, I have literally been at a loss for words. Amazing is too simple of a word to describe the powerful emotions and lessons I learned over the past week. But it is the only word that I seem to be able to say in person. My closest friends are surely frustrated with me, because I have spent the last few days in a kind of moody, jet-lagged state and I have told them nearly nothing about my fantastic trip, often brushing them off or avoiding the subject when they ask. Therefore, I am going to blog and hopefully I will be able to adequately illustrate everything that has happened to me, and help everyone to understand the significance of this trip for me.

Instead of starting at day one, I feel that I need to start with my favorite part of the trip…

It was Wednesday, and my friend Anya and I were strolling through the Spice Bazaar of Istanbul. Row after row of nearly identical shops stretched before us, selling nearly identical things: oriental spices, scarves, knick-knacks, and tea. Oh the tea! One thing that we had learned about Turkish culture is that everywhere we went we were offered a petite glass of tea: either the strong Turkish variety or Apple flavored. 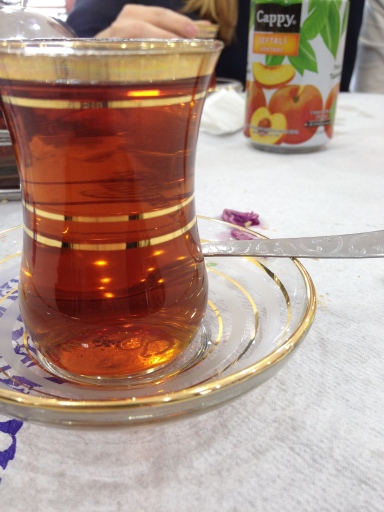 So Anya and I were on a hunt for tea. Since nearly all of the shops offered the same goods, it was just a matter of settling on a shop to buy from. We had just decided to go into the next store we came across when we heard a voice call out “Hey, Spice Girls!”

Now this is a fairly normal experience in Istanbul. Workers are stationed outside of their respective shops, and they are expected to get the attention of people walking past, usually using whatever means they have at their disposal, through bribes such as Turkish Delights, or more often through a common language.

All over Istanbul we had been hearing people call us “Spice Girls” and we were at a loss as to why this phrase was so popular. We knew of the pop-group of course, but why was this phrase in particular so popular in this city?

Anya and I stopped after hearing this phrase again, and then turned and proceeded to interrogate the poor guy as to why he was calling us “Spice Girls.” Surprisingly, the guy was able to give us a sheepish, yet eloquent reasoning behind the phrase.

Honestly, I was so shocked to hear such good English that I can’t remember what his reasoning was!

Regardless, Anya and I entered the shop and proceeded to buy quite a few bundles of apple, pomegranate, and jasmine tea.

The conversation that happened next I can only describe as being magical:

It turns out that this man, Abdullah, is a refugee from Syria. (He does not have refugee status, but according to the very definition of the word refugee, he is most definitely one) He speaks English so well because he attended University in Syria and taught English in his spare time before everything started happening and he was forced to come to Turkey. 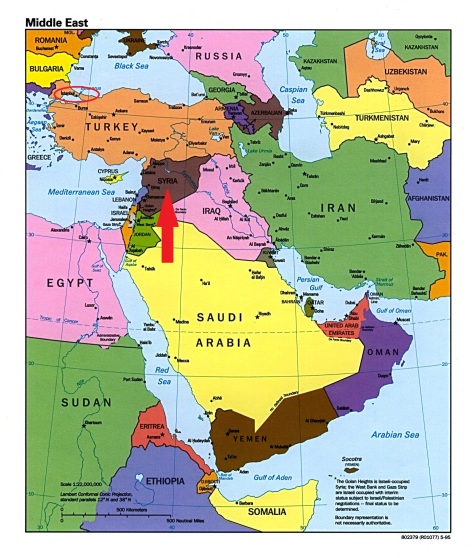 **I cannot even pretend to be an expert on Syria, but I invite everyone reading this to Google “Syria” to find out the facts, and visit the UN’s website on Syria or BBC’s timeline. Focus on the time period from 2011 to present**

The most basic thing you should understand is that what has been occurring in Syria has -been a blatant violation of human rights on the part of the government.

Shock is the word to describe what I felt after hearing that.

Remembering our research, Anya and I asked if we could come back to talk with him the next day about being a refugee, and he invited us to have tea or dinner with him, since he did not feel comfortable talking about the subject at work.

So that Friday evening, Anya and I headed back to the Spice Bazaar just before closing to have dinner with our new friend. We bought some more tea (so that his boss wouldn’t get too upset with some random girls hanging about the shop!) and sat down to watch the bazaar shut down all around us. A few minutes later Abdullah walked back in, out of his uniform and in normal street-clothes and we walked out of the bazaar with all of the other shop-keepers to the bus station where we boarded some random bus, that was going to a random part of town we had never been to.

**Disclaimer: I know what you guys are thinking. You boarded a random bus, going to a random part of the city, with a random stranger, in a foreign country?? Yes, yes I did. But Abdullah was not a random stranger. Not once during this entire evening did I ever feel unsafe. Abdullah is one of the rare individuals that you can’t help but trust implicitly. 🙂

We went to a Syrian restaurant, where Abdullah ordered food for us, all in Arabic. 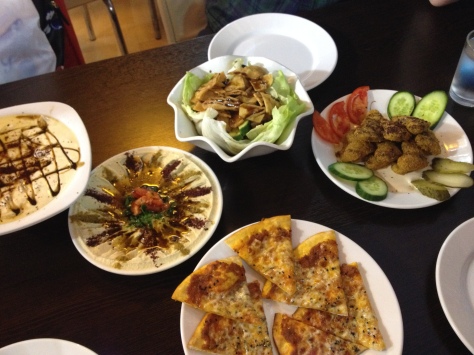 After, Anya and I sincerely tried to pay for the meal, especially after learning that Abdullah’s family had just arrived from Syria on Monday, but with no luck. Regrettably, girls paying for dinner must be a purely American custom, but this new knowledge only made the evening more special.

Then we walked around the area for a good hour, learning all about Abdullah. He told us about life in Istanbul and his past life in Syria. Before everything started life was perfect, but after you couldn’t take a taxi without fear of being killed by the secret police. Of course like any college student, they still went out at night, but they increasingly encountered dangerous situations. He showed us a picture of the Virgin Mary in his wallet, and explained that despite being Muslim, he cherished the picture because a friend had given it to him and explained its significance. Before, he told us, it didn’t matter what religion you were, and that he was friends with everyone, Christians, Sunnis, and Shias.

As he was telling us all of this I realized that while I had learned about the conflict back in the United States, I had never truly comprehended what this meant for people our age especially. His description, made the conflict all the more real, and terrifying. You never knew where the next missile was going to land.

Then he told us something that was almost heart-breaking: he hated all of the other countries in the Middle East, for being silent bystanders to the neighboring human-rights tragedy. Essentially, he feels that the world turned its back on Syria in its most important hour.

Granted the United Nations has been passing resolutions, but the fighting still continues. I too, started feeling angry, the intricate politics of why the United States has not interfered escaped me under this raw testimony.

Anya, tried to offer some explanations: the catastrophe in Iraq prevented the US from acting decisively in these contexts, the economics of war and accepting refugees, and the general unwillingness of the American public to fight. All of these explanations, while pertinent when making any political decision of that magnitude, to me, seemed to dehumanize the people of Syria. Human rights are being violated. That alone should be cause enough for everyone else to rush in to save the lives that still remain.

Despite having lost everything to this war, Abdullah is the most optimistic person I have ever met. It’s beautiful. He is always smiling, and he kept telling us about how he plans to come to the United States and finish his college degree. His visa has already been denied once. He told us he thinks he was rejected because he is from the Middle East and is Muslim. It saddened me to hear how obvious American prejudices are to outsiders.  But he still hopes and dreams of the day he will be able to join all of us in living the “American Dream” and I realize how lucky I am, and how often I take being American for granted.

Eventually, we came to a bus stop, and Anya mentioned how late it was getting so we agreed to head back. Yet, we let several buses pass us by: none of us wanted to say goodbye. So Anya explained the American saying of “See you later” and we all made plans to see each other in the future. The second Abdullah makes it to the United States, we will take him to try some good old-fashioned Southern iced-tea, our treat.

Whoever makes it to the others first, we decided, will buy me dinner! Anya and I are already searching for ways to go back to Istanbul, so watch out Abdullah 🙂

Then Anya and I hailed a taxi, we all exchanged hugs and “see you laters” and then he was gone.

I cried the entire way back.

(Abdullah if you’re reading this I’m about to be very embarrassed!)

I cried, because I realized Abdullah was most likely the most beautiful person inside and out I would ever meet. He had everything in Syria, and was just like us, a college student, but then he lost it all, and yet he still hopes. His optimism is mind-boggling to me. He is always smiling, and every word his says is truly genuine. He brightens the life of every person he meets.

I sincerely hope, with all of my heart, that he will be able to fulfill all of his dreams.

I’m sure that I speak for both me and Anya, in saying that, Abdullah, if there is anything you ever need, we will be there for you. 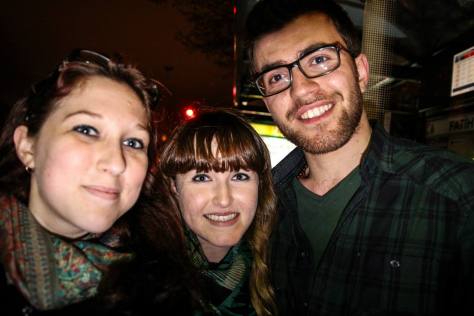 Now I need to go find another tissue…