Day two in Florence started off with a croissant and cappuccino at our hostel. Italian croissants are actually quite different from their French cousins as they are a bit denser and sweeter like brioche. (Here are some links to the first part of my vacation to Athens and then the first half of Italy)

Then we headed over to meet David.

Then we visited the Medici Chapel and haggled our way through Florence’s famous leather market before grabbing lunch at the jam packed  Trattoria Da Mario where we were thankfully able to find seats in the basement. I ordered the Tuscan pot roast which was a fantastic decision. The meat fell apart under my fork.

Then when we were walking through the streets we stumbled upon another Grom, an Italian gelato chain.

We wandered over to Santa Croce next and said hi to Michaelangelo, Galileo, and Machiavelli. (They’re buried there) and then ate some fantastic cannoli at this giant open air market in front of the Basilica that was there for a festival or something.

Then we promptly worked off the cannoli by climbing up to Piazzale Michelangelo for a superb view over the city at sunset. 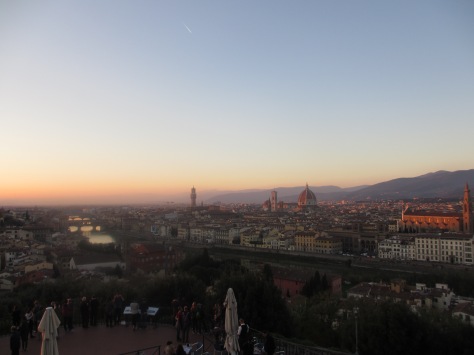 I had some authentic Italian minestrone soup for dinner, partly because I had started to come down with a cold that day! 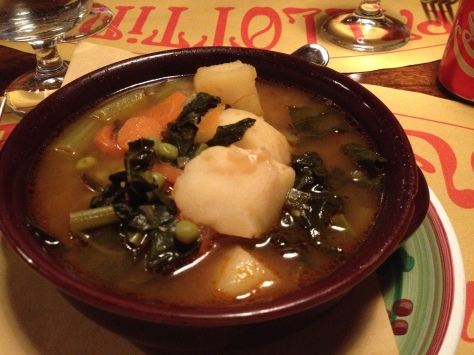 Florence was probably my favorite city of the trip. It was significantly smaller than Rome, which was nice and I loved the Tuscan colors and vibe that surrounded the city. Also living next to Botticelli and David would not be such a bad thing!

The next day we took another train to Venice. Wow. Don’t ever believe people when they tell you that Venice is disappointing. It was everything I thought it would be and more:

Don’t judge me, but one of the first things that popped into my head was actually a Pokemon movie I had watched years ago that takes place in a fictional Venice!

We dropped our bags off at our final hostel and grabbed some lunch:

And no lunch would be complete without the dessert that follows:

Then we visited Saint Mark’s square, the basilica, and the Doge’s palace all at once. Thank goodness we were at the very end of tourist season because there weren’t any lines at all!

I guess the only thing that disappointed me about Venice was the lack of high speed chases going on. After watching The Italian Job I guess I had expected Venice to look like this:

Then thanks to Yelp we found a “fast food” Italian pasta place that served their pasta in cute little to go containers like this:

The next morning I had another latte macchiato:

And then on the way to the ferry station we stumbled across a mask store where we spent at least an hour, trying on the various Venetian masks. They were all absolutely beautiful, but pictures were not allowed in the stores.

Next we caught a ferry over to Murano island, which is famous for it’s glass which can be found all over Italy. We followed the signs to watch a free glass blowing demonstration:

We ate lunch on Murano and the restaurant’s specialty was asparagus risotto:

Guess what I had for dessert?

However I was able to taste the cannoli I ate later that day!

I spent the rest of the day, wandering through Venice’s narrow, winding streets. The tiny streets seemed magical during the day, but downright dangerous at night as some of them would cut off into dead ends with no warning. Venice was wonderful to visit, but I don’t think I could ever live there.

For my last dinner in Italy I had more pasta:

The next morning we left bright and early to head back to Paris. I have to admit, I was very glad to be back, especially since I’d been sick the last 3 days. Travelling quickly is efficient, especially for college students on a budget, but it sure was stressful having to change cities every two days.

Seriously. I don’t even want to think about the number of stairs I walked up to have “picturesque” view or see some ruins.

3. Italian coffee is so good it will ruin all other coffee for you:

But actually, I was really early for class just the other day so I decided to have my first ever Starbucks in France. I got a mocha latte. I swear I couldn’t tell if it was just hot chocolate or if there actually was coffee in it. Conclusion: Italy ruined Starbucks.